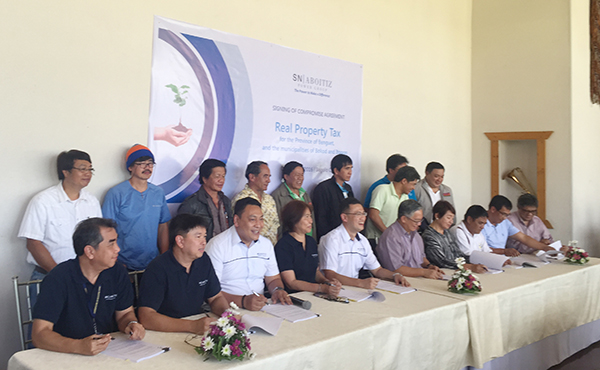 Officers of SNAP-Benguet, the municipal government units of Bokod, Itogon and provincial government of Benguet sign the compromised agreement at Baguio City.

Hydroelectric power company SN Aboitiz Power and its host province Benguet reached a compromise agreement on a real property tax (RPT) dispute that has reached PHP157.7 million, representing three years of taxes to the municipalities of Bokod and Itogon and for Benguet province.

In 2010, Benguet issued an ordinance lowering the tax rate of structures from 80% to 40%. However, at the start of the implementation of the ordinance in 2014, Bokod and Itogon applied the higher tax rate of 80% to some SNAP properties after assessing them as machinery.

SNAP filed its opposition with the provincial treasurer’s office and eventually to the Local Board of Assessment Appeals. It continued to pay the assessed amount “under protest” from 2014 to 2016 while the appeal was pending. Because of the payment under protest, the local government units could use only 50% of the collected amount, while the remaining 50% was held in trust.

According to the agreement, “the parties decided to resolve the RPT Appeals amicably and have entered into an agreement that is acceptable and fair to both of them.”

“Benguet recognizes the essential and pivotal role” of SNAP-Benguet in the province’s continued progress and economic development. It also recognized SNAP’s legal position that the properties in question are “structures” and not machinery, making them eligible for the lower tax rate of 40%.

SNAP COO Joseph Yu welcomed the agreement and recognition of its claim. “But what is more important is our relationship with our partners. That is why SNAP has come to a decision not to demand the refund of the excess of the taxes we have paid, so our host communities can utilize the full amount of P157.7 million for their community development projects” he said.

“Though we may have issues, it is this spirit of partnership that allows us to talk and overcome obstacles,” Yu added.

Governor Pacalso expressed his appreciation for SNAP-Benguet for making the agreement possible. He added that they “consider SNAP as part of our constituents and we make it a point that the people, community and company in our constituency are in good terms. This agreement will be able to help communities especially now that we are on the verge of rehabilitation after Typhoons Karen and Lawin.”

RPT is the tax on real property imposed by the LGU. SNAP-Benguet owns and operates the 105-megawatt (MW) Ambuklao hydroelectric power plant (HEPP) in Bokod and the 140-MW Binga (HEPP) in Itogon. It is a joint venture of SN Power of Norway and AboitizPower.